I must admit, I'm a big fan. I'd love to work with her but she often works with all-female crews, which is understandable considering the nature of much of her subject material.
I think any filmmaker can learn a lot from Longinotto. Here are some interview links:
http://www.channel4.com/fourdocs/people/kim_longinotto_player.html
http://www.bbc.co.uk/dna/filmnetwork/A25072355
http://www.youtube.com/watch?v=fqXETz0DlGI
http://www.britfilms.com/spotlight/kimlonginotto/
http://www.bafta.org/learning/20-questions-kim-longinotto,547,BA.html#overlay=hidden
Posted by rosswhitaker.tv at 7:56 AM No comments: 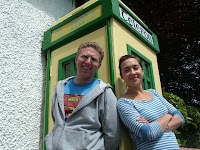 The phonebox project continues... We've been on the road for two weeks now and it has been brilliant. Who could have know that this project would capture people's imagination like it has. At first, we were old school, scouring the villages of Ireland for phoneboxes and related stories. Then it just seemed to catch on. The Irish Times did an article on us and then tonnes of other media outlets followed. Funnily enough, we had contacted a load of radio stations already and many of them ignored us... then suddenly they all wanted to talk to us. Unfortunately for some of them, Tubridy got us first and we had to disappoint a few nice people.


Here's what the Irish Times said:

And IFTN did a bit too:

We're taking a week off this week (and we also need time to call everyone back) and then we'll be back on the road next week.

The film is due to premiere in Cork in November.
Posted by rosswhitaker.tv at 6:50 AM No comments:

Meant to mention this a long time ago - I saw a wonderful film at Hot Docs that I think everyone should see. The documentary was called Rough Aunties and it was by the filmmaker Kim Longinotto. I saw another great film by Longinotto last year at the Britspotting Festival in Berlin where Saviours was also playing. It was called Hold Me Tight, Let Me Go and it really impressed me. Longinotto is one of those incredibly courageous filmmakers that bravely makes films about tough subjects and, equally bravely, sticks to her stylistic guns. Longinotto is an observational filmmaker and a brilliant one.

"Fearless, feisty and resolute, the 'Rough Aunties' are a remarkable group of women unwavering in their stand to protect and care for the abused, neglected and forgotten children of Durban, South Africa. This newest documentary by internationally acclaimed director Kim Longinotto (Sisters in Law, Divorce Iranian Style) follows the outspoken, multiracial cadre of Thuli, Mildred, Sdudla, Eureka and Jackie, as they wage a daily battle against systemic apathy, corruption and greed to help the most vulnerable and disenfranchised of their communities. Neither politics, nor social or racial divisions stand a chance against the united force of the women. Once again Longinotto has managed to bring us an intimate portrait of change from Africa, this time from the new post-apartheid South Africa, a nation being transformed with hope and energy into a new democracy."

I couldn't have said it better myself. It's a wonderful film and I highly recommend it.

I can't wait to see Longinotto's next film. For now I'll have to make do with two films of hers that I just bought on the internet - Divorce Iranian Style & Runaway.
Posted by rosswhitaker.tv at 6:30 AM No comments: