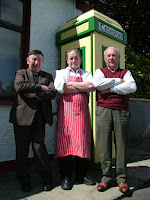 IFB funded short films have had a successful weekend picking up a total of seven awards and honorable mentions at the Cork and Kerry film festivals.
The 54th Corona Cork Film Festival saw wins for Bye Bye Now and Moore Street Masala and two honorable mentions for A Film From My Parish - 6 Farms, a short which also won at the Kerry Film Festival along with The Man Inside and The Wednesdays.

The Reality Bites BYE BYE NOW directed by Ross Whitaker and Aideen O'Sullivan picked up the Audience Award for Best Irish Short Film at the Corona Cork Film Festival after its premiere in the Opera House on Saturday. The short documentary looks at how the phone box has gone from the centre of Irish life to the verge of extinction through the stories of those who remember it fondly.
David O'Sullivan's MOORE STREET MASALA picked up the Audience Award for Best International Short Film. The musical love story was filmed in Dublin earlier this year and mixes the colour of Bollywood with the diversity of modern Irish culture. The film was produced as part of the Short Shorts scheme which premiered at the Galway Film Fleadh in July.
The Framework short A FILM FROM MY PARISH - 6 FARMS directed by Tony Donoghue received two Honorable Mentions at the Cork Film Festival in the Best Irish Short Film and Best International Short Film categories for its imaginative and emphatic look at a rapidly disappearing rural world. The film also picked up the Best Documentary Short award at the Kerry Film Festival.
Meanwhile Rory Bresnihan's Signature short film THE MAN INSIDE was awarded the Best Film title in Kerry. The short film has had a successful year having been named Best European Dramatic Short at the European Independent Film Festival in Paris in March and winning the Best Live Action Short Under 15 Minutes Award, 2nd place at the renowned Palm Springs International Film Festival.
The short comedy THE WEDNESDAYS directed by Conor Ferguson picked up the Best Irish Short Film award at the festival. The film has already won acclaim and awards at prestigious festivals such as Clermont Ferrand and the Aspen Shortfest in the US.
Posted by rosswhitaker.tv at 5:49 AM 3 comments:

Bye Bye Now! is an amusing, poignant documentary about the fate of the Irish phone box which has gone from the centre of society to the verge of extinction.

We Irish are known for the having the gift of the gab. As a nation we love to talk, But until the 1980s most houses in Ireland were without telephones. Until this time, the humble phone box was our chosen method of instant communication. It was at the heart of our lives.

Now, however, the phone box is on the way out. First came the house phones, then the e-mails, then cell phones and texts - evolving technology which led the way for the demise of the phone box.

This short documentary intertwines wonderful anecdotes with the warmest of characters as they recount their memories of the small concrete structure that was so important in rural Ireland.

Bye Bye Now! is a bitter sweet tribute to the phone box, a historical document and a barometer of how much we've changed with the times. Light-hearted, sensitive, engaging and entertaining, each character tells a different story.
Posted by rosswhitaker.tv at 5:43 AM 2 comments: