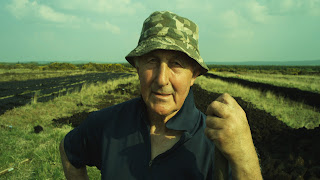 Posted by rosswhitaker.tv at 2:20 PM No comments:

LOOKING BACK AT THE BAILOUT

The Bailout was a documentary I did last year while working in Prime Time that used eye-witness accounts to tell the story of how Ireland came to be in the EU/IMF financial programme.

It’s almost exactly a year since we made it and it reared it’s head again this week when it won Best Business Feature at the Smurfit Business Awards. Here’s a pic of reporter Robert Shortt picking up the award:

It was a documentary that changed in form on a few ocassions during the making of it. At first, it was to be a shorter report that would allow in-studio discussion afterwards but halfway through filming an hour-long slot became available and suddenly we were under pressure to deliver a one-hour programme in a total of four-and-a-half-weeks. I think I had a pretty extreme look on my face for those few weeks!

I suddenly realised that I’d never done a full hour of interview-driven TV before. I’d done long documentaries driven by observational scenes and I had done plenty of short interview-based pieces but never a full hour. How to pace it? How many shots would I need?

So, I decided to resort to what I know... it was an unfolding story so I divided the documentary into scenes and thought about the relationship between those scenes and how they would drive the narrative on.

I wanted the documentary to work as a drama that had an “and then and then and then” flow with each scene being motivated by the last. I was working with the excellent and thorough reporter Robert Shortt and we both felt that we didn’t want commentary in the documentary and that really helped. Retrospective analysis would have interrupted the flow. We wanted the audience to stay in the moment and not to be pulled out of it by opinions.

We also had to think about how the reporter’s narration would work in that situation and I felt it was important to make sure that our interviewees revealed the important information, so we looked closely at each piece of voiceover to ensure that it didn’t give away the key information in the upcoming scene. If the audience knew what was coming up, why would they stay interested?

The Sunday Independent said the programme was “gripping” and hopefully that was a reflection of the way we approached it.

The documentary was on the RTE Prime Time website but seems to have disappeared today, so hopefully it'll reappear there soon.

Posted by rosswhitaker.tv at 2:04 PM No comments: