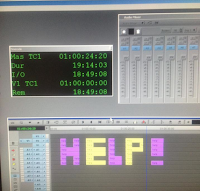 Just off the back of a very interesting 36-hours in Chicago. Looking out at snow on the runway of O’Hare Airport as I write this. Really hope this plane is going to take off.

While here in Chicago, I had the great experience of dropping into KarTemQuin films, one of the most lauded documentary film production companies in the world, having made Hoop Dreams, The Interrupters, The New Americans and many more amazing projects.

KTQ is located about 5-miles from central Chicago in a large house with many many rooms. There seems to be numerous edits ongoing at one time and Tim, who gave me a tour of the place, told me that at some stage in the next few months the company will have nine edits ongoing at the same time. Wow.

What really struck me about their approach is their reverance for the edit stage of the filmmaking progress. The film is found in the edit through hard work, time and inspiration. They really put the time in and try to make every film as good as it can be.

One thing that I think a lot of us filmmakers could learn from is the collective approach that they seem to employ. I got the impression that during the editing process they will show the film to many of the other folks who happen to be in the building at the time. The film will be watched several times over the course of the edit by many people and will be honed with the help of their colleagues. Even after the festival premiere of a film, they’ll chip away at it.

They also offer the opportuity for filmmakers to come in and show rough cuts once a month. They’ll project the film in their basement and sit back and watch it and offer their advice. They just seem to love the rough cut stage.

Many of us are exhausted by the time we get to a rough cut and just want to polish off the film and get on to the next thing but at KTQ they recognise what a crucial point that is. They’re dedicated to honing the film and energised by the prospect of making it better through watching and rewatching it. They definitely benefit from the sheer quantity of filmmakers that are hanging out and working in the building. It really made me think to show my cuts to more people, get more advice and really try to make the edit count.

And hopefully someday I’ll be lucky enough to get some edit notes from the very friendly folk from KTQ.

(photo courtesy of Fionnuala Ni Chiobhain)
Posted by rosswhitaker.tv at 9:59 AM No comments: