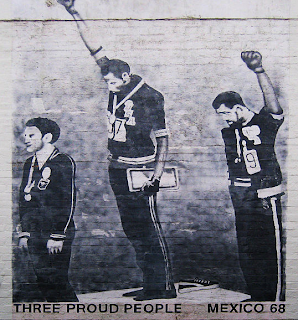 The Wider Influence of Sport...

I'm tongue tied at the best of times, so being faced by the eloquent and intelligent forces that are Ken Early and Declan Lynch is probably not the best forum for me to be at my most articulate - but I gave it my best shot today on the Newstalk Panel hosted by the ever pleasant Ger Gilroy.

The (below) striking short doc - part of the ESPN 30 for 30 series - was the jumping off point for a discussion on the wider influence of sport in society. The film is about how Muhammad Ali came to the rescue of western hostages in Saddam Hussein’s Iraq in 1990.

You can listen to it on the Newstalk player as the first hour of Newstalk Sport today (Saturday 26 January).

( The title of our film was When Ali Came to Ireland and it screened on RTE One in Ireland on January 1st. We’re hoping that we’ll have the chance to broadcast it in other countries.

While I never met the man himself, it’s pretty obvious to anyone who has read about Ali or has seen footage of him that he was a uniquely magnetic human being. Anyone that I’ve spoken to that was lucky enough to spend time with him attests to that but it was more than his magnetism that made him such an important figure.

The place of sport at the forefront of our consciousness is, in my opinion, a given (something that Declan Lynch argued quite strongly on the panel). During the discussion, I remembered that as part of my college studies I read some compelling anthropological papers that convincingly argued that because society has made human beings more individualised, sport has replaced our instinctive need to be part of a tribe.

A football team, like Man Utd for instance, can easily fill that void, providing us with tribal colours, brethren to unite with and a common foe to battle against (Man City - ha). It gives us the opportunity to go to war every weekend and behave in a way that the rest of our lives rarely provides. How often do we get a chance to scream and roar consistently at a screen and for it to be completely acceptable?

Try it at the cinema.

And the figures bear out the notion that sport is a special obsession for us. Two of the three most watched television shows on Ireland last year covered live sports events (Katie Taylor’s Olympic final and the Ireland soccer team’s opener in the Euros).

The popularity of sport gives our athlete heroes the platform to be heard. Muhammad Ali (then called Cassius Clay) took the boxing world by storm and the combination of his fighting skills, looks and persona made the world take notice of him long before he controversially converted to Islam and refused the draft to Vietnam in the mid-60s. It was because he took those actions at the height of his fame and as new World Champion that they held such significance.

Ali was unique but he didn’t operate in a vacuum. The 1960s was a time of protest and he certainly wasn’t the only public figure to make sacrifices in that decade. The 60s seems like it was a culmination of sorts for the black community in fighting for their human rights in the US. In 1955, Rosa Parks refused to give up her seat during the Alabama Bus Boycott and Martin Luther King’s influence was growing, perhaps culminating with his famous ‘Dream’ speech in 1963. All of this was before Ali’s actions in the mid to late 60s.

Even Ali’s famous line, “I ain’t got no quarrel with no Viet Cong… he never called me nigger” had a strange forerunner.

"Hitler didn't snub me – it was FDR who snubbed me. The president didn't even send me a telegram.”

Both men (Ali and Owens), it seems, we’re rightly more concerned by the problems they faced in their home country. Owens was banned from running soon after his incredible four gold medal haul in the Berlin Olympics for trying to cash in on his success. He would never run in international competition again. While he lived in the same accommodation as his white teammates in Berlin 1936, Owens wasn’t treated so equitably back home. He was forced to use the freight elevator in the Waldorf Astoria Hotel when he was attending a victory reception back in New York. And Owens wasn’t invited to the White House or acknowledged by his own President despite being the star of the Olympic Games.

Ali followed in the footsteps of people like Owens, Parks and King. He was obviously influenced too by Malcolm X. And, you would think, he can only have been encouraged further by the solidarity act of John Carlos and Tommie Smith in 1968 when they raised gloved hands and bowed their heads in what came to be known as the Black Power Salute.

I mention all of this not to take anything away from Ali but more as a lead in to talking about athletes of today. The idea that sport should be kept separate from politics is often stated but when sport is so prevalent how is this possible? Sportspeople ignoring the ills of society and human rights problems are already being political by choosing to stay schtum.

Ali was attacked for the actions for which he is now lauded. Smith and Carlos were derided for the salute that is now so admired. Owens is criticised sometimes for not doing enough for human rights...

Avery Brundage was the head of US Olympic Sport who insisted on America attending the 1936 games where Owens' excelled. Brundage then withdrew two Jewish athletes from the US 100m Relay Team so as not to embarrass Hitler. Brundage always said that sport and politics should be kept separate.

Brundage was the man who banned Owens in the aftermath of the 1936 games.

Brundage later became head of the IOC and banned Smith and Carlos after their salute in 1968. He was still in the job in Munich in 1972 and was the man who said the games must go on even after Israeli athletes were murdered.

Sport and politics must be kept separate, said Brundage.

It’s just not possible, I think... sport and politics are intertwined. Sport has a massive impact on society and that can’t be ignored.

I admire Kevin Prince Boateng for standing up to racists and I think footballers can be leaders in fighting racism and homophobia in society. They will no doubt be criticised by their contemporaries but perhaps some time in the future their actions will be acknowledged for having an impact. Today’s sportspeople might not have as many influential forerunners as Ali did but maybe they can look at the legend of Ali himself and take inspiration.
Posted by rosswhitaker.tv at 9:04 AM